Known as the main currency of the ecosystem, HyperNation token (HNT) will be listed on a public chain built by HyperNation. The public chain network will implement all the decentralized facilities such as DEX, Yield Aggregator, Liquidity Mining, Cross-chain functions to complement its meta-union ecosystem.

Future activities in the metaverse include the trading of virtual real estate and land, supported by a global commercial marketplace. Advancements of virtual reality can be realized through the out-of-body experience (OBE), VR and XR. Boosted by a futuristic concept of HyperLab, HyperNation will haul up the power of science, research and development to a universal level.

The birth of a new genesis. HNT token aims to offer a decentralized financial instrument that is trust-less, automated and completely independent from a central source of governance.

HyperNation will create a public chain that will revolutionize the future of the internet through a multilateral networking platform.

High – Scalability: The ability of the system or application to handle a huge volume of workload or expand in response to an increased demand for database access, processing, networking and system resources.

A) Blockchain Indexing Protocol - Applications will use HyperNationQL to perform query on subgraphs known as Open APIs to retrieve index data on the network.

C) Lightweight Framework - In order to receive payment, the user must first establish a private key/public key pair before broadcasting.

Consensus Point is a unique system of HyperNation, with a unique algorithm to calculate the citizen’s consensus and participation. A basic income structure that derives from the distribution of Consensus Points (CP) and HyperNation dollar (HND).

Relationship between HNT and HND

HyperNation dollar (HND) is based on UBI’s concept, entrusted to maintain the value of UBI.

The Proof of Burn is a consensus mechanism with minimal energy consumption, HND acts as the fuel that is burnt, whilst it is destroyed to maximize the value of HyperNation token (HNT).

Similar to UBI, the demand increases as the accumulation of Consensus Points increases.

As it circulates for mass usage in the ecosystem, HNT will prompt the supply for HND to increase. 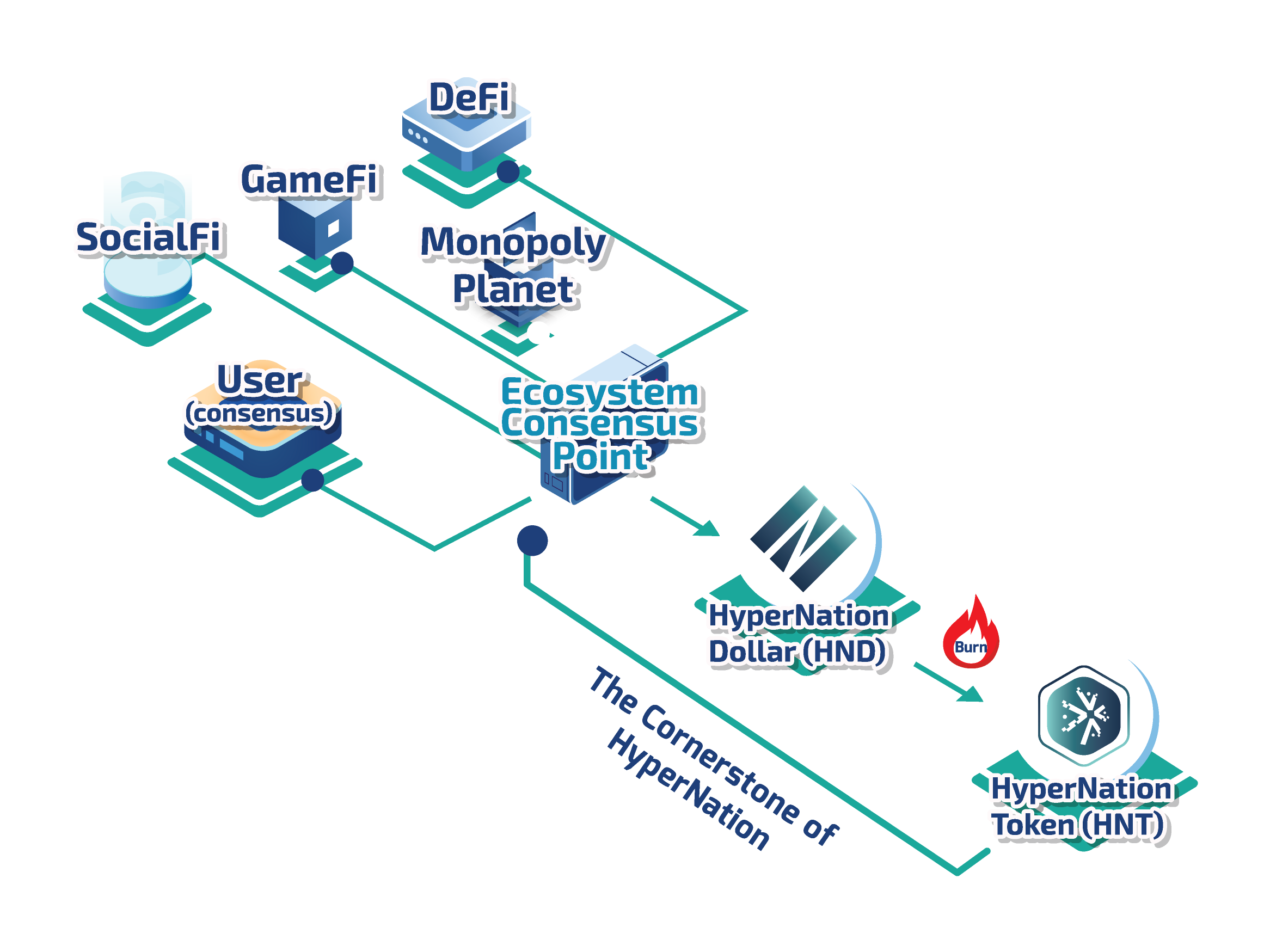 HyperNation citizens can be part of an ecosystem that includes Planetary Monopoly, SocialFi, GameFi and DeFi and so on.